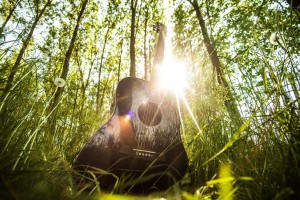 I am back from Sliotar’s St. Patrick’s day show in The Porterhouse. It was the bands 18th birthday. I have played with them for 15 years. It is the longest by far I have ever held on to a job. It was a quite amazing show, even if I say so my self. And let me make it clear here, we are all accomplished musicians with years of experience. Are we the best players of our instruments in the world? No, not even close to it. We are good players, but what makes it so special is the chemistry and combinations of three of us together.

This brings me to what I want to talk about here. I can teach you to play guitar. If you are disciplined and follow my instructions, you will get better at it. In fact I do not want to be a teacher, I want to coach you to enough that you know how to teach your self. But I can’t teach you that magical ingredient. That most of the time in my experience comes from that chemistry between the musicians. We become more than the sum of our individual talents put together.

Let me explain it this way. Led Zeppelin, whether you like them or not, no one is going to be denying the effect they had in the rock music. They were, and still are great musicians. Since the death of John Bonham, the band members have had their individual paths in the music. But none of them had the same ground breaking effect. It was those four people together that became the magic.

So no, there is no blueprint. There is no way saying someone is better just because their technical abilities as a musician are better. It all comes down to that magical ingredient. And that is something you can’t plan for, it happens naturally and unexpectedly.

Now there are also those virtuoso artists who are unbelievable and go on to change the history of the music on their own. But they are one in a million. And no amount of practice will make you see the music the way they did, or do. But that does not mean you should not practice, these virtuoso artists are known for not putting their instruments down and always working on their music.

What I am trying to say is if you come across that magical connection between the musicians, nourish it, work on it and never take it for a granted.