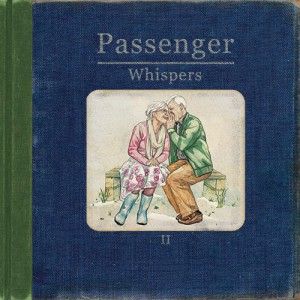 Michael David Rosengerg AKA Passenger is an artist whose journey is nothing short of inspiring. For years he busked the streets around Europe and Australia, to fund his recordings. He is a crafter and a hard-working musician. He has a bag-log of albums, which very much records his musical journey. I never met him in person, but I have heard nothing but good things about how nice of a guy he is and how engaging with the fans he is. In 2012 his fourth studio album All The Little Lights came out and the tittle track became a hit around the world. As a result the shows got bigger, but still any given chance, he would make time to busk as well.

All the little lights was followed by his fifth studio album Whispers in 2014. But as soon as the tour for the Whispers ended Mike announced online that there was going to be Whispers II. He was going to go independent and release the album on his own record label, but what really got me was the fact that he is donating all the profits from the album to UNICEF to help the children in Liberia.

This is a great example of how someone in his position has decided to do something great. As he is doing it on his own label, Black Crow records, obviously he will not have the same promotional powerhouse behind him as with his previous album.

“There is absolutely no money being spent on marketing . none of these songs are ever likely to get on the radio and chances are it won’t get picked up by the press in a big way . this entire project is based on word of mouth so please , if you can , share the video’s , the music and the message with as many people as possible . even if you can’t afford to buy a copy of the album – the sharing of it is just as vital .”
-Mike

The album it self is fantastic. It is taking Passengers songs even deeper in to the story telling territory, you all know I am sucker for story songs 😉 But this is not a review, this is me telling you to go buy the album and help the children in Liberia.

You can buy the album from his website at: passengermusic.com

And here is a great 25 min short film they made including his five music videos from the album and some of his busker friends as well. Oh yeah and some clips from the street outside where I live here in Dublin 😉