What are you grateful for today? 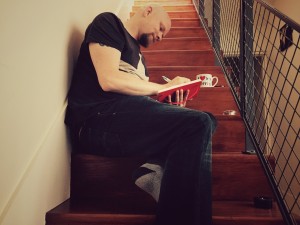 About two years ago, I was in a middle of another tour with Sliotar. We had just finished a show and I was talking to a young gentleman who was having a night out in his local bar, as he had heard there was a band over from Ireland. The conversation started in the usual way, him complimenting us about the show and the music we had just played and telling me how much he enjoyed it. Soon enough the conversation drifted towards how much he admired the fact that I was doing something I loved. So I asked him what his passion was and what is holding him back. It turned out he had passion for digital animation, but his mother was ill and required his help, and he did not have money to buy the equipment required to get him started.

I could see in him defeat. He had convinced him self that this is the way his life was, and he just had to go with it. So we had a beer together. I questioned every one of his reasons why he could not go after his dream. I broke the reasons down. I explained to him how by little steps and a lot of focus he could go after his dream. I know it is hard to see the path when the headlights only light up 100m of the road in the dark night. But if we don’t start by traveling those first 100m in the dark, we get no where.

My new friend who I had met only few minutes ago while he was in a bar trying to escape his reality, left exited and believed he could do it. He believed he could go after his dream, even if it was just one small step at the time.

This week I want to share with you some tools to take just a bit more positive look at your everyday life. I want you to understand that you are in charge of your own life and dreams. I know it sounds quite “spiritual,” but bear with me. Music business is one of the hardest fields of business to break into, and if I did not have faith in my self along the way, there would be no way I could have made it this far.

So let’s get started. I ask you to spend few minutes thinking what you are grateful for today. Even better, write them down. Think about how lucky you are to have these things you are grateful for. Appreciate them. This is only a start, but I need you to do this. If you wake up in the morning concentrating on the negative things, you are not going to be having a good day. But if you start your day by being grateful of things in your life, you don’t allow the negative stuff control you, or guide you.

What are you grateful for today?