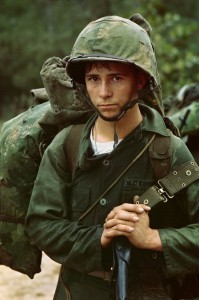 This weeks song I wrote one night sitting in the dark in my bed typing it in to my mobile phone. It was the time of the protests in Kiev, in Ukraine. I have very dear friend who lives in Ukraine, so obviously seeing the news made me worried for her safety. And on that particular night a Twitter friend of mine sent me a video of what was going on in Venezuela and how the western press has turned a blind eye. The fact that these countries were on brink of a revolution, or a war wasn’t what made this song to pour out. We all have been exposed to news enough on our life time for us become numb to the suffering we see on our TV screens. But what really got to me was seeing these people fighting against their own. The thought of you being the soldier with the gun in your hand under pressure from the “powers that be” and the protesters facing you. Eventually under the fear and stress you pull the trigger and take some one’s life. Now imagine the protester in the crowd that gets shot would end up being someone from your neighbourhood, or maybe your old class mate from school? I know some of you would not have sympathy for the one with the gun in their hand, but most of the time the once with the guns are just puppets following orders, trained to precision to do just that, follow orders. The thing is, no mater how much you tell your self “I was just doing my job”, at the end of the day, it’s that solder boy who has to live with it for the rest of their lives.

So I ask you to share this song with anybody who has been touched by a war, any one who might be that solder boy with the gun in their hand, more than likely scared as hell, just following orders probably made thousands of miles a way in a very comfortable office, with no consideration for the victims of their orders, or for the ones who have to carry them out. Keep a cool head young soldier boy.