The night before the morning after 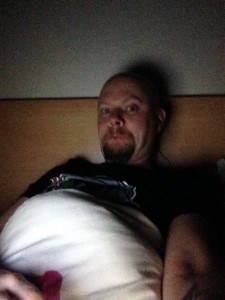 It is the evening before “the day”. I am feeling lot’s of things wright now. I am sitting on my bed in a dark room, just the screen of the computer giving me light. My very first solo album is coming out tomorrow. Or should I say it will be available from iTunes, Amazon, Spotify… in few hours time. Six months ago it was just an idea brewing in my head. I mean I had started recording material before, with the attention to release it as a solo album, but something always got on the way. This time, I had a clear vision in my head. It was a definitely an ambitious plan, no doubt about that, but I decided to chop it down to blogs of tasks and this has worked a treat 🙂 But the truth is, this is still just one blog of the bigger task.

Derek Sivers gave a Ted talk on the subject of Keeping your goals to your self. The idea is that if you share your plans and ideas with others, you are more likely not do them. Sounds bizarre, I know, but he does make a point. It makes us feel better to share our ideas and it feels like we are already doing something, instead of actually doing something. So I am telling you with quite bit of pride, my first solo album “Northern Boy” is out, but let me also say, there is more on the way, sooner than you think 😉

So those feelings? Well, excitement, nervousness, satisfaction, fear… its all there inside of me right now. But let me just say, big thank you to all of you who have joined my Twitter and Facebook pages and signed up to my mailing list. You keep me going and I thank you for that 🙂