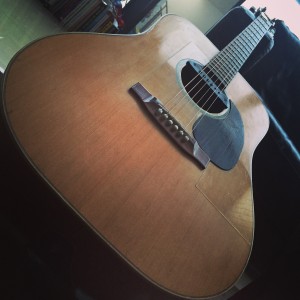 Ok, I have a quite few guitars, and I always swap and trade instrument. I am a guitar nerd, I love them! But there is a one guitar that a lot of people ask about, mainly due to the fact that it is hard to recognise. So I thought I’ll share with you the story here. Back in 2003 I lived through every musicians nightmare. I just got off a five-hour flight, and picked up my guitar from the luggage belt, opened the case as I always do to check that the guitar is ok. I lifted the guitar out of the case, and to my horror, the head stock stayed in the case… The neck had been completely severed around the first fret.

I was just about to start a ten-day tour, playing every night and I had no guitar… Lucky enough the promoter was willing to advance me with enough cash that I could get a replacement. I searched every music shop in town, and after looking at few guitars that were ok and in my price range, I came across this Musima. I genuinely believe it must have been one of the last to leave the factory before it was closed. So here is a little bit of back story on Musima. 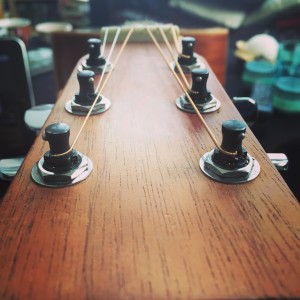 Museum was founded back in 1952 in the old East Germany, behind the Iron curtain. They became the country main instrument manufacturer and soon enough their instruments were exported abroad in large numbers. My very first electric guitar was a Musima. It was cheap, had a neck that resembled a baseball bat split in half. The electronics were not the best, but the pickups were nice and nasty 😉 It was a stratocaster copy. This guitar got me started in a big way, but also later became my experiment, on which I learned everything there is to know about guitar electronics. So you could say I had fond memories of the company.

But by the time the iron curtain came down, so did the glory days of Musima. Between 1992 and 2003 the company went thru few owners. But during this time they also produced instruments for another well-known and respected guitar company called “Lakewood,” which now are very well-respected brand that make high-end instruments. In 2003 Musima went bankrupt and the company closed its doors after 51 years.

So there I was, in a strange city and the lovely people in a music shop put this guitar in my hand, and I could not put it down. It had amazing open tone, which often is rare in new instruments. It had all solid woods, which was still rare in its price range back in those days. So after about an hour of playing it, we shook hands and a deal was done. 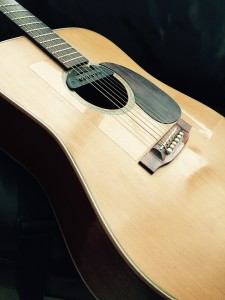 This guitar has gone through hell and back with me, and it never let me down. Over the years I bought several more expensive guitars made in the States and in Japan, but those guitars have moved on, while this one stayed with me. I have customised it a bit. I changed the tuners into Planet Waves tuners, I shaved a bit off the braces inside the guitar, changed the pickup system several times and also sanded off the horrible looking golden logo it had in the headstock.

Today, it plays as well as the day I bought it. It has scars, and a lot of them, but it has done the miles with me year after year. Now I am in two minds, as it is a dreadnought size guitar, and the size is giving me a little bit shoulder trouble. Also I am getting worried about flying with it, as if it breaks, I don’t think I can replace it. So even though there is not much wrong with it, it might be retiring to only studio and session work soon enough. But to find a replacement for it is not going to be an easy task.