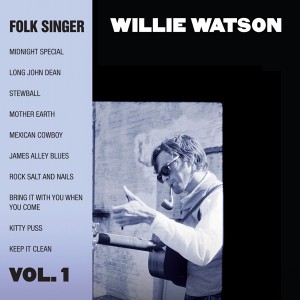 Sometimes I feel almost guilty writing about music that I fall for straight from the start. Willie Watson’s debut solo album “Folk Singer Vol.1” is an album that I as a musician can relate to quite a lot. It’s just a man with his Guitar, five string banjo, voice and songs. Bare bones and raw.

There is some lovely use of reverb on the album, but what I love is the presence in the guitar and banjo. You almost feel like Mr. Watson is playing in the room with you. Also his skill in the instruments shows not only in what he plays, but also in what he doesn’t. Obviously very skilled player, but that never gets on the way of the song. The opening track of the album “Midnight Special”, and old american folk song thought to have originated from the prisoners in the American south, is a great example of this with its sparse guitar, which is there only to support the vocals that could carry the song on its own. His voice is stunning, and it links these traditional American folk and blues songs to our modern world. Good example of Willies relaxed banjo backing can be heard in “Stewball,” an old folk song that roots in Ireland, but was adapted and sung by the slaves in the South. My personal favourite ( at the moment ) is “Rock Salt And Nails” written by Utah Phillips, broken love lament.

Willie Watson was a one of the founders and a long time member of The Old Crow Medicine Show, who are definitely big part of the so called “folk revival” of the past ten years (how do you revive something that never went away in the first place? ). I can relate to how working in a band like that is a great school to polish your craft and that is just what Willie has done. His debut album will definitely establish him as a solo artist and as the tittle hints there might be a followup to “Folk Singer Vol.1”.