Fans have the power to fix the broken music business

October 13, 2015 by jpkallio in Uncategorized 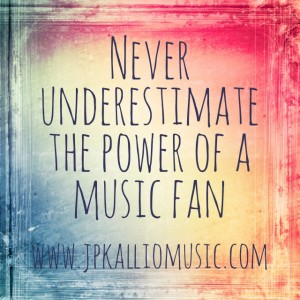 I was honoured to be asked to write a “blurb” (those recommendations at the back page) for a new music business book coming out soon, written by friend of mine and the host of Break The Business podcast Ryan Kairalla. One of the perks of getting to do something like this is that I get to read the book, also titled Break The Business, before it comes out. When the book comes out, I will be definitely writing more detailed blog post on it, as it is brilliant! It is one of those music business books that not only every musician should read, every music school should have as part of their required reading list, but also anybody who is a passionate music fan and wants to support the artist should read. But more on the book soon.

But it got me thinking once again about a subject I have been touching on a bit lately, the artist-fan relationship. As much as the music business like to moan about how internet has killed the recorded music, even more so it has built a connection between the independent artist and the music fan.  This is something that I see much more valuable, and I personally find it rewarding. I haven’t put nearly two years of hard work, long hours, days, weeks and months building my solo career because of financial rewards, believe you me, I am still far away from it. I have done it because I get to connect with people through my music and writing these blogs everyday. That is what drives me.

In the book Ryan points out in detail how toxic the contracts artists are offered by the record labels these days are. Most artist go after the mystified goal of getting signed because they don’t have the financial recourses to pay for the recording, production of their own album and the expenses involved in releasing it. Sure there are artists also who lack the business knowledge of how to do it them self. But this raises the question, are they ready to record an album in the first place, if they don’t have, or are not willing to learn the required business knowledge. For the lack of finances I do have sympathy, for the lack of knowledge not so much. Especially when there are people like Ryan, who spend a lot of their valuable time offering that business knowledge for free on his blog and podcast. And Ryan is not alone. There are hundreds, if not even thousands of people offering advice for those of us musicians who are willing to learn.

But here is the thing, the financial side does put a strain on the artist. And many of you music fans are not aware how little, if any of the dollars you spent on buying physical albums, downloading music, or even streaming it online actually makes its way to the artist. The top end of the business is flawed and corrupt, no doubt about it. But as an independent artist, crying about it will not do much good to anyone. What so few music fans still don’t know, is how much difference they can make with very little effort. So let me try to break it down to you in bit more detail. I’ll use my self here as an example, but you can assume any of your favourite independent artists would be in a similar situation.

In the past few years I have been recording songs at my humble home studio. Most of them are quite basic recordings consisting me singing and playing my acoustic guitar. On few of the tracks I have had friends help me out. But most of it is in the basic acoustic format. By the end of the year, I will have 104 songs released! Yeah, I know… That number is hard to take in. By now I would like to take some of those songs and record them with a full band. There is a studio here in Dublin I like, and I know and trust the engineer. But all of this comes with a price tag. The musicians involved and the studio fees would need to be paid. On top of this, I would like to document the process with some video footage, which means the very least I would need to hire a camera man for few days. Now once the album would be recorded, and mastered, art work and duplication taken care of, I would need to promote it. There is a lot I can do myself, but to give the album a realistic chance of success, I would need to use a professional independent promote. Also it would be beneficial to have few pro quality videos. As you can see here, it very fast adds up to a quite substantial amount of money. With my very conservative estimations (which involves me asking for a lot of favours) the price would be somewhere around $10000. That is a lot of money for any independent artist.

So what would be my chances of getting this finance? Banks don’t exactly love musicians, that’s why the record labels have done so well in the past. But even if I would be able to get a business loan to finance my album, the problem is it will take a long time before the album would start to make money. Would the bank put the loan on hold for a six moths to a year? Not a hope in hell.

And this is where the music fan can make a world of difference. I know most of you think there is not much you can do, but little goes a long way. If your favourite artist decides to go the route of crowd sourcing, by paying the price of the album in advance is a great start. So it would only take 1000 fans to pay $10 to finance your favourite artists album. I personally have decided to use Patreon, a new way of financing artists work. Here you can pledge from as little as $1 dollar a month. You might think that the one dollar makes very little difference, but let me break this down. It takes me time to record the album, that’s the nature of the process. So I would not necessarily need all of the money as a once off payment. But if I had 1000 people pledge $1 a month, the album would be fully financed, recorded and released in less than a year.

The purpose of me writing this is not to get you all to finance my album. The purpose is to make you all understand how a small contribution can make a world of difference to your favourite artist, how it can keep them working, creating more music, art, videos or what ever it is they do. I support some of my favourite artists this way, and I am proud to do it as I am a music fan as much as I am a musician. Oh yeah, and at the end of the day, by me supporting them instead of a major label, I am giving the artist complete creative freedom. You can do it too. Fans have the power fix the broken music business. Support your favourite artist.