Are we on the brink of war over control in the music business? 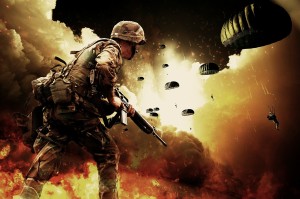 I’ve had this thought for a while now. We have all been pretty wrapped up in the streaming music conversation for a while now. First we were all throwing daggers at Spotify. hen things stabilised a bit, and just when we were about to relax and try to figure out what can we do with this new technology, along came Apple music. For us musicians they were easy targets to wave our fists and blame them for killing music. They were letting people access our music, and the return we got was very minimal.

But as I pointed out in the past, most of the time, it was the big old labels who got their hands on the money coming from the streaming services first. And this got me thinking. In the past fifteen years the price of recording equipment has dropped massively, and the ability to produce high quality music at home has become not only reality, but part of our life. As a result, there has been a flood of new independent, self-produced music to the market. Now obviously a big chunk of it might not be professional standard, but a lot of it is. Surely this has been scaring the major labels for years now.

Back in the late part of last decade, recording music was expensive business. It would literally cost thousands of dollars a day! So the only real way to do it was through the backing of a record label. So they were in charge. That “control” was taken away from them by the help of budget home recording equipment. Also internet made it possible for the music to be distributed from our home computers, again a task that the major labels used to have control of.

Lets face it, major labels were, and still are powerful corporations. If they fight something, they rarely lose, just simply due to the financial resources they have. So why have they (quietly) made deals with the streaming services? Because they can make money out of them? Sure that would be one part of it. But I have another theory.

It still costs money to make professional quality recording. Yep it is cheaper than before, but still it does cost money. And as the CD sales are dwindling, downloads are dropping and streaming is rocketing through the roof, the return on an independent recording are small. Too often so small that they don’t even break even. Where as the major label can still push enough money in to advertising to tp the scales, even through streaming.

So what if the main reason behind the major labels lack of resistance to the streaming services has been control. What I they are trying to make the recording process something once again only they can afford to do? We think of them as small sighted and out of touch, but what if they are actually playing much bigger game? What if we independent artists are the ones who are small sighted? The majors throw enough fuel that we attack the streaming services, while they quietly gain control again. I  believe we better wake up before it is too late.

What can the independent artists do? We have the tools to fight back. Direct connection between artist and the consumer is where we will still win. Things like crowdfunding and Patreon are out there to provide us a format. They don’t do the work for us, they just provide a service we can utilise. But if we are willing to build those relationships between us and our audience, we will kick the major label monsters in the back side every time! But as long as you are willing to believe the lies, that the streaming services are the enemy and that the old school major label model is the only viable option, they will win.