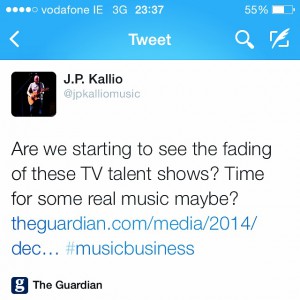 I posted a link to an article on how the X-factors viewing figures were the lowest since 2004. I accompanied it with a comment that is posted here.

Let’s say in hindsight I should have chosen my words more carefully, as obviously this was an issue some people felt strongly about. So I will try to explain my view on the subject here, as the twitters 140 characters just isn’t enough 🙂

Thinking back I should have used instead of the “some real music” something along the lines of “organic music”. I have no doubt there has been a lot of very talented people through these TV talent shows, and some of them have gone on to successful careers as well, but lets make few things very clear here. These shows have been designed for TV, in a way that will bring in the maximum viewing figures. They look for particular types of singers in the show, which has widened in some of them over the years. They rely on songs that most of us know, and in many cases the list of songs the contestant gets to choose from is very limited.

You see, the way copyright works is if the artist has not given permission for anyone to use their song, the competition would require a written contract from the songwriter, which I’d assume many would expect to get rewarded handsomely with a fee as well as the royalties. If the song has been given permission before, then it is fair game. But I’d assume the cut versions often used in the show would require permission as well as the original songwriter, or publisher.

Also in many cases the contestant don’t even get to choose the songs, as their “coaches” choose the songs for them. There has been a few occasions where we have seen original songs as well, but they are rare. So my view is (and I emphasise here that it is only my view) that any artists in these confines cannot be part of creating what I would call organic music.

So I might be a bit biased here, as I am a songwriter and I value artists who write their own songs. There is an art in making someone else’s song your own as well, but I believe this is much rarer to come by than many of us think. So let’s not fool ourselves, these shows are for people looking for the shortcut. On two different occasions in the past I have been approached by agents asking me to audition for these kind of shows. In both cases I refused and if I was asked again, I would refuse again. I know I am not what they are looking for. And besides, I believe in organic growth. I believe in doing the hard craft. I believe I am already doing what I love and I am the one calling the shots.

So those of you who might have been offended about my hasty selection of words, I apologise, I will think twice before I post next time. But I do not apologise for my views on what I think of the shows, or where I see their position in the music industry. Pick up your guitar, write fifty songs, pick the best of them and go out to play them live over and over again. That’s what people in the business have been doing decades before these shows came along and that’s what we will keep doing long after these shows are just a distant memory.