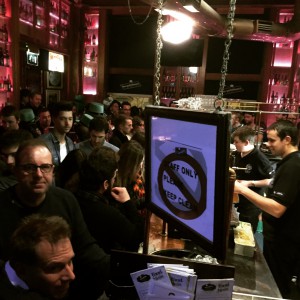 Sometimes I get tired of screaming against a gale force wind. You shout from the bottom of your lungs and no one hears you. I’m sure you all know what I mean, we have all been there. But I am not talking about my music and trying to spread the word about it here for once 😉 I’m talking about change. I am talking about how the society around us is growing and people are maybe more aware of the truth than ever before. As much as the technology seem to have replaced some of our social interactions, the powers that be, can’t hide behind the big media monsters anymore.

But I am not on another rant about the media either, I’m sure there will be plenty of time for that later as well 😉 What I am trying to talk about is that boisterous behaviour. That egotistic macho image that men need to be strong and powerful and angry to be real men. The constant need to fight your own corner, the constant need to show you are stronger than the rest.

Hey I’m not innocent here either, I have my own bits of dark past. Nor am I trying to say we all should be pushovers. What I am saying is we need to strip down those old stereotypes. We need to accept that those old stereotypes is what too often is holding us back from real growth. In the past few days I have seen some pretty crazy behaviour from some men. Some of it has been blatant disrespect for women, some of it has been men just been rude for some macho idea where one person feels above someone else, just because the other person works in a service industry. I mean what makes you think you are better than someone you have never met and know nothing about? Oh yeah, and may I just say that if you feel like pulling your “private parts” out in public feels like a great idea, I think it’s pretty safe to say you have had enough to drink…

Don’t get me wrong, the ladies are not an innocent party here either. There are times you do it as well, or even worse, expect men to do it… But I am still ashamed to say, most of what I see is men. And it is almost always that macho, trying to impress the mates, borderline bully type guy. Can we not just acknowledge the fact that this kind of behaviour has nothing to do with how “tough” you are, but how much you are trying to compensate for your own insecurities? I mean we are several generations of people here who had to study basic psychology in school. And those of us who did not, surely common sense should kick in somewhere along the line.

Let’s be brave and put a stop to this. Let’s make a difference for our future generations. Lets try to make this world of ours just a little bit nicer place for all of us. And as here in Ireland, and pretty much all around the world by now tomorrow is one of the biggest drink fest’s, the St. Patrick’s day, do your self a favour, be nice to the bar staff.