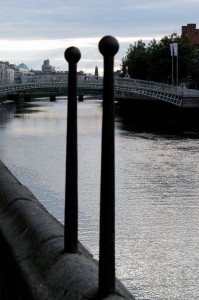 I was born and grew up in Finland, got in to playing music around 10 years of age, but it became part of my everyday life around when I was 13. Got into rock, blues, hard rock, punk… always had a band on the go.

In 1994 I came to Dublin for a weeks holiday. I had little bit of an interest in Irish music before, but on that trip I got bitten by the bug. So I came back for a few months visit and learned as many tunes as possible. In 1996 I finally moved over and lost my self in the world of Irish traditional music. I spent a lot of time to learn and understand the music and I would even go as far as to say I am quite good at backing Irish traditional music on guitar. But that’s enough of that, now let’s get to the real point. 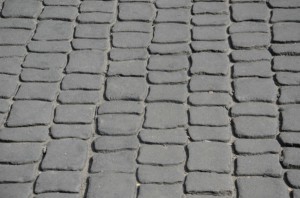 When I first came in to Dublin, Temple Bar was a busy area. Not much have change on that account. Tourists around the world walk the cobblestone paved streets of this so called “cultural quarter” of Dublin. When I came here, that was very much the case, there were several art galleries, some of them still survive. Most bars in the area had a traditional session at least some days of the week. There were Jazz club, Folk club and even a great underground rock venue. Since then obviously the area has become much more commercial. Price of beer has gone through the roof, came down a bit and seems to be on the rise again. Buskers on the streets went from acoustic guitars to a full blown bands with sound systems. Times change, and I do understand that. But one thing that has changed in the past five years in Temple Bar, is the Traditional Irish Session. Slowly the sessions got a microphone hung over them to expand the sound all around the pub (also loud music give us less opportunities to talk and we end up drinking more. Something the publicans like to see). Then came new sound systems and all the instruments were miced up individually and the volume went up a notch again. The publicans started to favor more songs. So the balance went from sets of tunes to a song, to half and half. Now, we are lucky to hear one set of tunes after two songs. Also it was not unusual to have table full of musicians playing, sharing, swapping tunes. In other words keeping the tradition alive. Now don’t you worry, that tradition has not gone and died on us. Just because things have changed in Temple Bar, does not mean the rest of the country has given up on traditional session. But I get asked all the time, where there is a good session in Temple Bar… So now tourists flog in to pubs in hopes of hearing traditional Irish session, what do they get? Two guys on guitars singing Oasis… 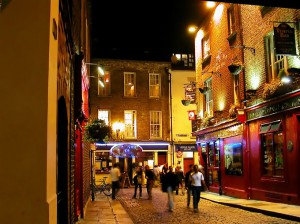 But who am I to criticize the state of the Irish music in the capital city? After all I am just a Fin 😉 So should I just keep my mouth shut? Sorry, can not do! During the Temple Bar Trad fest 2014, there was no sessions organized by the festival it self. There were not even a place allocated for it. But bunch of musicians got together on a Sunday morning to play some tunes in memory of a fellow musician we had lost few years back. The pub was filled up pretty fast, and even without the sound system. So few of us decided to try few more sessions building up to the St. Patrick’s day. Just to do our bit.

But what I would really like to see, is those sessions returning to the pubs in Temple Bar for tourists to see and hear what the real Irish Traditional Music really is. See it live and living right under their own eyes. Also these sessions of late 1990s and early 2000 where were I got to learn my craft, by playing beside some great musicians. Also there was always a session to join on a night off. The music and the tradition was alive in Temple Bar.