How to tour abroad with your band part 2 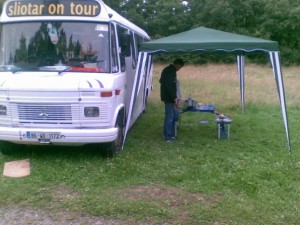 In 2005 I was sitting on a porch of a rough wooden cabin with my band mates Des and Ray from Sliotar. We were on the festival grounds of Keltska Noc festival in the Czech republic, where we were going to be playing the following night. It was a day off for us on our tour of the Czech and on a day off, boys play 😉 We were trying to come up with a way of cooking an egg using only tin foil and sunlight. It was a roasting hot summers day in Central Europe, no wind in sight. We were the lucky ones back in those days. Our promoter had flown us over from Dublin, picked us up from the airport and he did all the driving around for us. All we had to do was be up in time and play our shows.

But during that afternoon something happened. An old camper van / tour bus of another band from the Czech pulled into the festival grounds. The bus had seen better days, but it still was driving strong (in fact last summer, eight years later they were still driving the bus). I turned around to Des and said we should get one of them and hit the road with Sliotar. Des laughed, but something did get filed in one of the filing cabinets in his head that day. 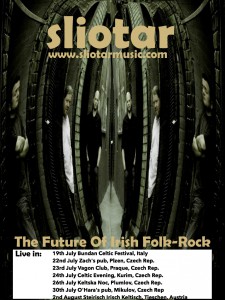 Only few weeks to a year from that day, we were sitting on the deck of a ferry on our way to France. In the car deck of the ferry there was our pride and joy. A 1986 608D Mercedes-Benz School bus, which Des had converted into our tour bus, with bunk beds, fully operational kitchen and bathroom with shower. This was every teenage kid’s dream… The only problem was, we were not teenage kids anymore. Little did we know what the next six and a half weeks would take us through.

The planning of this tour and the following 14 tours, would make me and Des quite the experts on booking and organising a tour. Our tour bus got downsized after the fuel prices soared in 2008. We’ve had numerous breakdowns, tours where we lost money, tours where shows got canceled (I can only remember one) all sorts of illnesses, we had lots of great beer, some bad beer, got frozen in Denmark, heat stroke in Italy, and attacked by swarm of very organised mosquitos in Austria (they only come out between 10-11pm). Our personal relationships have been tested to a breaking point on several occasions.

Now we are about to bark on another tour with Sliotar. The 2014 Summer Tour takes us to Italy, Czech Republic and Austria. This would be what we call a manageable tour these days, only two and a half weeks.

I wrote a blog post on touring few weeks back and you can read it HERE, consider this as the second instalment. I am not trying to discourage you. Touring can be a lot of fun, but before you set out, you do need to know what you’re getting yourself into 🙂 In the next post of this series, I will go into more detail how I went about booking that very first tour.

Share:
Folk music How to book your own tour How to tour J.P. Kallio Sliotar Tour Travel