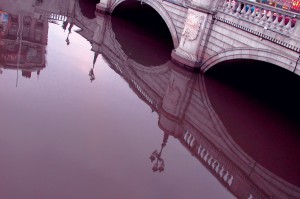 This week’s song “This Town” is number eight on the new album. Wow! Time just seems to be flying by so fast. Before I get into the story of this weeks song, let me just once again say a massive thank you to a great friend of mine Barra McAllister. For those of you who don’t know him yet, he is one of the better Irish wooden flute players out there and also a bubbling songwriter himself. When I was working on the song I wanted to keep it acoustic and simple as the melody was strong enough to stand on its own. But still I felt It needed something just to break it up a bit. Barra added this wonderful instrumental break to it and once I heard it I knew the song was finished. So thank you Barra!

Now let me make it clear, this song is not me preaching. Most of this song was just me observing my surroundings in the past few years. Everything in this song is based on real events or facts. So once again, when something bugs me, I pick up my guitar and the song just writes itself. Don’t get me wrong, I love Dublin! But in the time I’ve spent here I have seen a massive change in the city. Some of it for better, some of it not. I don’t want to put you off from visiting this wonderful city brimming with history and culture, but I got to be honest as well. Dublin has had an epidemic drug problem for a long time and it is only growing. There are efforts in place to tackle it and some good meaning people working very hard to do something about it. But the government just seems to be very happy to brush it under the carpet. But the fact is, a lot of the top level politicians are detached from reality to a certain extent. I’ll give you a real life example. Quite a few years ago while Bertie Ahern still was the Taoiseach (Prime minister) of Ireland I was playing in a venue, which name won’t mention, but it was in the Dublin city centre main tourist area. The bar in question had a launch of an Irish Music festival and the Taoiseach himself came in to make a speech. During that day I was playing six hours (yeah… you heard me!) in the bar and I watched the preparations for the event out on the street. The Gardai were around all afternoon. Every single “homeless” or “substance user” begging or loitering in the area were removed. All of the sewers in the surrounding streets were pumped. And obviously the streets were cleared from traffic so that the Taoiseach could arrive uninterrupted. Now I am not defending Bertie Ahern, there is a lot of evidence to point that he is partly responsible for a lot of the financial trouble this country has gone through in the past few years, although he still denies it. But I can’t help but wonder if you loose the touch of reality, when the streets are “cleaned” where ever you go… No one cleans the streets where I go, I can see this epidemic every day.

Also the property prices and rents are rising in Dublin and it’s surrounding areas at an alarming rate. I fully understand that it is a free market, but the last time this happened, the consequences were catastrophic. Not only did it cripple Ireland, it was a big dig in the ribs for the whole European Union. At the moment there are people becoming homeless every week in Ireland and whatever action the government is working on, it is too slow.

Irish society has been very much all about the community in the past. Unfortunately we seem to be loosing that in Dublin. I know it is a big city, but there was always a sense of community here. Now some of us are holding on to it in any way we can, and it does kill me to see it slip away.

And the last thing, I mentioned the Starbucks in the song :-D. I don’t really have anything against them, but I do stand behind the complaints I make in the song about the quality of their coffee and paper cups. But hey, I still do use them from time to time on my travels for the wifi, I just wish the quality of the coffee was more the focus than all the extras you add into it 😉

So that was a long one 😀 But as I said before, Dublin is still a great city. Like every city, it has its problems, but beyond that there are some fantastic people who make this city the special place it is. Hope you like the song and please feel free to share it with the world 🙂