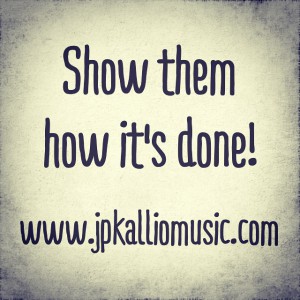 While I was preparing for a radio interview, I took a trip down a memory lane. I was trying to trace back my songwriting steps to the beginning. How did I get in to it? How did I start? I remember I wanted to be in a band even before I played any instruments. I remember my mother patiently allowing me and few of my friends to lock in to my room, and bash guitars and home-made drum kit. It must have been pure noise pollution 😀 But even at that early days, before I even had picked up an instrument, there were signs I might be taking it bit more seriously. This was back when I was nine years old, and already then I understood that the songs had to have a structure, verse and a chorus. I also insisted recording everything we did on an old boombox, that had an inbuilt microphone that picked up as much of the tape players mechanical noise as the noise we were exposing it to.

Thinking back now, my parents must have realised there was no way of shutting me up and sent me to guitar lessons in a hopes that some of the noise coming from my room would eventually get better 😀 The lessons did not go down so well… I lasted about six months… But then again something happened that I would continue embrace still today. No one was willing to teach me what I wanted to learn. I had no interest in classical guitar playing. So I set out to learn my self. What I did was find a song, try to break it down, and see if I could build it back up again. This also had a fundamental effect on my future songwriting. Unknown to me, I was figuring out song structures, and training my ear.

Now still today I apply this to pretty much everything I do. I figure out how things work, take them apart, and see if I can make my own version of it. I have implemented this in songwriting, recording, web design, music promotion, marketing, organising events, booking tours, cooking… Don’t get me wrong, I was never trying to copy anybody. I always had a desire to make my own version, see if I could improve on what was done before.

My grandfather, when he retired, started building model boats. They are extremely detailed, requiring insane man hours. He went on to win award in an expedition few years after he started. This got him a little bit of a fame in the model building world. And he was asked in a radio interview how did he get so good. His “humble” answer was, he just wanted to show them how it was done. So if my 86-year-old grandfather still thinks he can show them how it’s done, I damn sure need to give what ever it is I do my best shot 🙂

Go and write a song, Show them how it’s done!