The songwriter within us 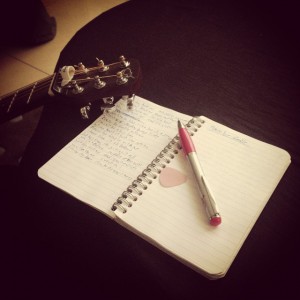 When I was thirteen years old, I wrote my first song. I tried before, hell I even tried before I could play an instrument. But when I was thirteen I wrote a song that had a story, two verses and a chorus. Ironically I wrote it because the band I was playing in at the time was only playing cover songs and my long gone father told me at the time there was no future in copying other peoples music. Ironically once we started to play original material, he went on to say that we skipped ahead and we should learn other peoples songs first 😀 Ah well… you can never win… Back in those days we did not have access to the internet, in fact it was just a wild idea we had heard rumours about. The extent of my knowledge of the music business was from a guitar and other music magazines I got my hands on at the time.

Now we have so much information available to us. We can write a song and share it on Soundcloud or Bandcamp in a matter of minutes and potentially millions of people can have instant access to them. But then again so can every other songwriter and this makes it harder for those millions of people finding your songs. But the actual songwriting process has not changed much at all. Sure now I can make instantly a rough demo of my new song on my iPhone, so I won’t forget it. In the past I recorded them onto a cassette with my boom box that had an inbuilt microphone that picked as much noise of the machines internal mechanics as my singing.

But the point is, the songwriting still happens in my head. Of course over the years I have learned so much more about songwriting, my own inbuilt critical editing system has become one of my most prized weapons. Also I have been exposed to a lot more music, I have broken down the structures of thousands of my favourite songs over and over again. I have read books on songwriting, blog posts, lectures, whatever I could get my hands on.

This is a bit of a reminder to all my songwriting friends, who just like me from time to time can get lost in their tracks in the world of music promotion. Let’s not forget where we come from, where the songwriter within us comes from. It is easier to have a purpose as a songwriter, when even if it is a small number of people sometimes, you can get your songs out there in the world for people to hear. I encourage you to embrace that. I encourage you to put your songs out there, instead of waiting for that “perfect moment”. But when you go out in the world to spread the word about your songs don’t forget, without that songwriter within us, we would have nothing to promote in the first place.