How not to run a festival 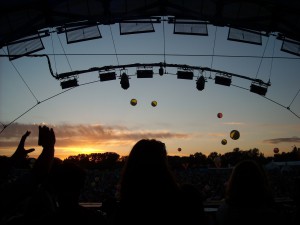 Talk about going back in time… One of Ireland’s top music bloggers Nialler9 brought to my attention something the organisers of the Killarney Festival of Music & Food were planning to do. The festival have some large acts, like Jools Holland, The Undertones, Marc Almond to mention few. They were also hoping to run “the Actbacker” stage for “the Emerging talent”. They were asking bands to sell a minimum of 50 tickets for €76 + booking fee. And the more the band would sell, the higher they would be on the bill. All sales would have been split 70/30% on the festivals favour. Nialler9 did the maths on his blog post on the subject, which you can read HERE, so I won’t get in to it anymore. But lets just say that as a musician I see this as an outrages set up and the fact that the festival even thought to go this way this day and age, just shows blatant disrespect for the up and coming musicians.

Now since this obviously got a lot of negative press the Festival has decided not to run “the Actbacker” stage, unless they find a sponsor for it. In my eyes this was the only reasonable thing to do. But their response on their Facebook page trying to defend themselves was almost as outrages. I would assume the festival will be advice to take this down as well, so I’ll quote the post here:

“Emerging Artists Stage – Update.
Killarney Festival of Music & Food had planned to create a brand new stage for emerging Irish talent. The promoters wanted to create the stage in response to the hundreds of requests that we receive each year from relatively unknown acts who wish to play at the festival.
In the past, we have only been able to accommodate a handful of unknown bands early in the day as festival openers, however this year we wanted to fill a stage for a two full days with musicians playing up to 11pm at night. We were planning to create a platform to promote new acts and accommodate up to 18 new bands over the weekend.
We wanted the Emerging Artists stage to be a highlight of the festival however due to the significant costs associated with creating a well-produced stage for new talent including a marquee, sound, lighting, generators, barriers, stage management, security the promoters can’t afford to create a stage and cover these costs for bands who have little or no track record. We would be delighted if a sponsor would come on board to cover the costs of the stage, then we wouldn’t have to go down the crowd funding route.
Contrary to misleading comments circulating through social media, we were not asking bands to ‘pay to play’. Bands and musicians who play would be paid a good fee (more than they would receive at any other festival), receive promotion through the festivals website and be included on festival merchandise and in an extensive marketing campaign while getting the opportunity to play alongside world class acts including Burt Bacharach, Jools Holland, TEXAS and many more to be announced.
All the bands had to do was reach out to their fanbase and seek their support and their fans would get a full day ticket for the festival in return.
Crowd funding sites including Fundit, Indigogo, Kickstarter and PledgeMusic are already widely used by many Irish bands and musicians to raise funds to produce singles and albums and there is no reason why they can’t help launch musicians careers by helping fund, profile building, live performances.
Due to the ongoing negative reaction as a result of incorrect reporting, Killarney Festival has made the reluctant decision not to go ahead with this stage at this time.
We have always supported and booked Irish talent and so far over 85% of the line-up is made up of Irish bands and musicians and we will continue to support Irish talent as much as possible.”

So I’ll include here few things I would like to point out. First of all, if the band is required to sell tickets to be able to play, in the music business we call it ‘pay to play’! no matter how the festival tried to claim this is not what they tried to do. If you want to use crowd funding to fund a festival, then the festival needs to do this, not the artist.

Also to accuse others for “incorrect reporting” is a cheap and desperate shot! Killarney Festival of Music & Food, you got judged based on the facts YOU provided. The artist is bombarded daily with services that try to get their money, but rarely deliver on their promise. I think it should be time to bring in some new legislations to protect the artist.