Acoustic guitar amplification is one of the most difficult and mystified of all the instruments. There are several types of pickups, all of them having their advantages and disadvantages. I have over 20 years of experience in the subject. During this time I have tried many of the main contenders in the business.

My attempt to amplify an acoustic guitar goes back to the days back in my parents garage, where we used to rehearse with some of my early bands. The first one was a cheap contact pickup, that you would blue tack in to the bridge. The sound was quite honky… Loads of midrange and not so detailed. But this contact pickup served me well attached to a piece of wood, plugged into a desk and by boosting the bottom end it made for a nice kick drum sound.

The second one was still a very cheap sound hole magnetic pickup. It had a volume and a tone knob attached to it and it took a while to learn how not to hit them while you strummed. Now I must say the sound improvement was massive compared to the contact pickup. I also had a strange interest in how stuff worked, so I did take the pickup eventually apart. It basically consisted a magnet, surrounded by a coil of copper wire, which was wrapped in paper. All of this was cased in a flat metal box that had six holes under the strings and a golden tinfoil like material to protect the holes. Simple, but it worked. The drawbacks were the lack of resistance to a hum and the pickup had a touch of electric guitar tone to it. 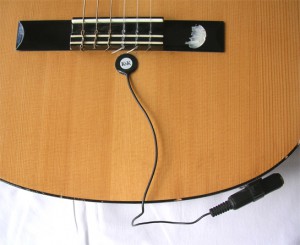 In my teens I did a few weeks of work experience in a music shop in Helsinki. During this time I K&K pickups. I purchased what was at the time their basic system. It had one contact sensor and an output jack you could tape on to your guitar. It was a massive improvement, but at the time I wasn’t playing many high volume shows on acoustic guitar.

Once I moved over to Ireland and started playing regularly live shows with acoustic through small to medium sized Sound systems. I realised very fast I needed something very reliable and feedback resistant.

While amplifying an acoustic guitar, it always seems to be a battle between the true tone and feedback. Amplified acoustic guitar is extremely prone to feedback. Under saddle piezo systems are the least prone to feedback, but not at all safe from it. Their characteristics can be harsh and quacky, especially when strummed hard. But at the same time, some of these characteristics make piezo pickups cut through a mix and a noisy bar. This is why they are a popular choice among the working musicians. As much as I like to experiment with my setup, I tend to go back to this one for its reliability.

I personally have used Fishman, Takamine, the old Martin (before they started using fishman) K. Yairi (Same as Alvarez Yairi in The States). I have also played other peoples instruments with L.R. Baggs element and Highlander under saddle pickup, which both are great and I am about to install the L.R. Baggs element into one of my guitars. I am almost shamed to say I don’t have a first hand experience on B-Band pickups, especially as it is a Finnish company, but they seem to be harder to come across.

Magnetic sound hole pickup technology has gone through the roof since my first experiment and in fact I used the Takamine tri-ax ( designed by and practically the same pickup as L.R. Baggs M1 active) for few years. It’s a great system, but still prone to some buzz if the venue electrics are not spot on. I know few people who were fans of some of the Fishman sound hold systems as well. Personally for me the sound was lacking. Highlander and EMG have their own systems that I have heard great things about, but have no first hand experience.

The contact pickups like the K&K western mini and L.R. Baggs i-Beam are popular choices especially with fingerpickers and for his purpose they produce a nice tone at low to medium sound levels. I have personal experience with both pickups. I find it is hard to find the optimal placement for these guitars and for every guitar it is a little bit different. Having said that these and the magnetic sound hole pickups require minimal alterations on the guitar itself. At the same time they are more prone to feedback at higher volume levels.

It is always said that the optimal sound for an acoustic guitar is accomplished by well positioned studio microphone, so it is no surprise that built in microphones have grown in popularity. Although one placed inside the guitar might not be the optimal place, they can add a nice bit of body sound. Most people I know, use this as a part of a two source system. Again at higher levels they are very prone to feedback.

I know this is lot of information to take in, so I will continue in the second part with my detailed opinions on the systems I have used. In the meanwhile, keep strumming.