Music as a skilled trade 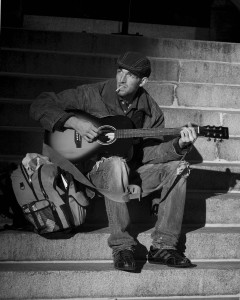 Even in 2014 you come across the stereotype of people not seeing music as a valid career choice. I was told by my extended family back in my school days, that music was never going to be a career. Even my dear mother, who by the way have been unbelievably supportive of my choices, even when she knew I was going to make a mistake, always told me to get a “backup plan”. Well… I never did. I only had this one vision in my head, Music!

Further on when I actually “got my first break”, I was playing in a band called TRE. I was young, playing four to five days a week, got to travel the world a bit. The band had a great few years of success, but then life got in the way and we all went different ways. On one of our trips I remember us playing in a pub and after the show ended up in a conversation with a gentleman. He asked us after seeing our show, what do we do for a living? We replied, music. This answer was something that just would not sink in, so he asked again, “Yeah, but really what do you do for a living?” It’s like in his mind, music was just a hobby, and no one could seriously think of it as a career, unless you were a big star.

Since then a lot of things have happened. The music business as it used to be known has turned upside down. The major labels are playing their swan song, playing it boringly safe and given up on real artist development. They just want to make their quick buck. Now medium sized independent labels have stepped in, and shown us that anybody with hard work has a chance. And the grass root has exploded in to a full grown forest. The DIY ethos of punk rock has become the norm all throughout music genres. There are some very interesting things happening in people’s basements and bedrooms that never would have a chance to see the light of the day in the past. Artist are in control of their own career. And those standing on the sidelines moaning about how there is no good new music around these days are the ones who only look for it in the old ways, TV, mainstream radio… Music is live and kicking more today than ever before and the prospect of a career in music is more real than in the past.

But still we get those people thinking we are just dreamers, wasting our lives. That we should have “a real job”. That we are just lazy… When I hear the word lazy, I smile, nod and walk away, but inside my blood boils for a second. Being an independent musician means you need to be an entrepreneur and damn good one at that! So do we go around calling people who start their own company lazy? I recommend you try that one and come back to me after the dentist has rebuilt your front teeth… Many of us musicians are willing to and have sacrificed many things you take for granted in life, just to be able to do what is our passion.

And on the other side, is the skill that goes into the music. There has been a lot of research gone into what goes on in the musicians brain while they perform and it is very fascinating stuff! Musicians stretch their brains more than anybody else. After a long recording session, or an intensive live performance I am shattered. Still at the same time my brain is buzzing like crazy and takes hours to calm down. I will leave you with a video on How playing an instrument benefits your brain. But before I do, let me just remind you that next time you think of your musician friend as “lazy”, take in count everything I said here. Some of my successful musician friends work harder than anybody else I know. I see Music as a skilled trade.