Music does not promote itself 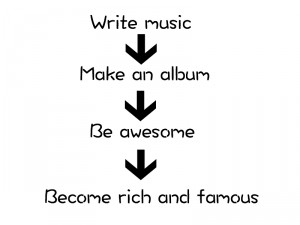 It’s been a few weeks since I wrote you a blog post about getting your ass off that couch, stop messing around with that playstation and start promoting your music, so here we go. Bugle up as I am not going to sweet talk here. You music does not promote it self! There is no automated system for promoting your new album, EP or a single, your fancy new YouTube video or what ever els yo have. We all wish for it, we all hope or it, but the fact is it does not happen! You need to do it.

Sure enough there are tools out there that can help you, some of them free and some of them not and after years of testing I can tell you, you get what you pay for… But hey, most of us are not willing to spend a penny on this stuff… We expect to get it for free. In fact, we believe if the music is good enough, people will come and discover us. So why would we spend any money?

So lets debug these myths. First of all, “build it and they will come”… Bullshit! Yeah, sorry for the language today, but I’m in a mood to kick you butt, so you can reach your potential 😉 Some of the biggest artists in the history were considered misunderstood geniuses ahead of their time, suffered through their lives. Now granted they did not have the resources we have today, but still often it comes down to the fact that they did not promote them selves. If your music is life changingly brilliant, no one will not know about it until they hear it. And here are the hard facts: Most people do not want to hear your music, until you give them a good reason to do so. According to Ralph Murphy (author and master lecturer on songwriting) on average people need to hear your song eight times before they like it, even then they only do so if it is great… So the all so famous line “if people only had a chance to hear my music” is not good enough, you need to replicate it eight times…

Sooner you accept the fact that you need to build your following one person at the time, the sooner you are on your way. The sooner you accept that you need to work on it every single day, the sooner you have found the “magic component”. The rest is up to you putting in the work, the hours. Don’t go and try to replicate the promotional model of the big record label acts. What works for U2 or Bruce Springsteen works because they are extremely well-known. So for them promotion is a case of informing people they have new album out. Well… these days even for them it is bit more than that… If people don’t know you, they don’t care that you have a new album out…

And here’s another thing, we always seem to think in numbers. For example, you would like to be featured in the Rolling Stone magazine because it has such a wide reach. So here is a quick question for you. When was the last time you went to buy a CD, or downloaded an album based on recommendation in a magazine? Now this is a very extreme example, but let me give you another example. In 2012 Sliotar, another band I play in. The music is Irish, celtic, folk, contemporary. So we decided to invest in an advertisement in the Irish Music magazine. We got a half a page ad for two months and as a bonus they also added a small writeup in the magazine. It is pretty much the only print magazine specialising in Irish music. So you would think we were advertising in the right place. Well you would be wrong… I would even go as far as say the ad was waste of our money. We would have been much better spending the money on targeted advertising online.

What I have learned when it comes to publicity, almost always few smaller specialised blogs writing about your music is much better than you concentrating all your energy in getting that one big writeup in a major music magazine or website. You are much better keeping things grass root level, building following, building interest on what you do.

Oh yeah, and lets not forget the most powerful part of it all. So if people don’t want to listen to your music, how do you get them interested? Tell them your story! Tell it in an interesting way. It could be blog post, it could be podcast, it could be a video. But what if you think you don’t have a story? Everyone has a story! You just need to sit down and write it, dig deep and be willing to open up. Without a doubt the most powerful way to win people’s hearts is to let them in to yours.

Now don’t forget, your music does not promote it self. Now go kick some ass!!!