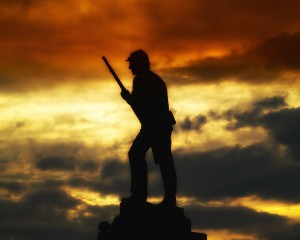 Lonely solder on a battlefield can be a dangerous thing. Not because he is going to take on an army on his own, but because everyone will underestimate him. And the longer he is left on his own, the more damage he can cause. He can infiltrate past the lines, sneak in to the town and cause real damage where it hurts the most.

This is you, the independent artist. The major labels do not want you to succeed, unless they can harness you to fight for them. You see you are taking a chunk, a small one, but still a chunk out of their pie. I hope you are targeting a very specific audience, while the major labels are targeting much broader audience. They have the resources to do this, they can sink money in to promotion enough that they can tilt the scales, eventually. This is something you, the lonely solder can never do.

I am not saying you can’t “make it”. But what I am saying is that the major label system of “making it” is out of your reach. Unless you are extremely rich, with enough money to throw down the well, the major labels are always going to beat you. And don’t for one-second think that the major labels don’t use every trick in the book to make those scales shift in to their favour. Major labels pump money in to advertising on a social media, like there is no tomorrow. If they release a video, they will invest on google ads to get enough plays on YouTube to make sure the video will show up on the front page of YouTube. They will pay journalist to write about their artists. They will send people into shops to buy the albums to make sure it will reach the number one spot. They do all of this to create a buzz, to cash up on the herd mentality, to make everyone follow and buy the album as well.

So every album you sell the major labels sees as a sale they have lost, unless they have a way of getting a cut out of it. And in one way or another they do. You see, the more successful YouTube or Spotify is, the more people their advertising is going to reach. What they really hate is the direct artist fan relationship. This is something they have no control over. This is something they cannot make money out of.

As an independent artist, the direct fan relationship is the most beneficial to you. But it is up to you to make sure it is also beneficial for the fan. You need to offer more than the major labels do, or otherwise they are going to take a large chunk out of your small pie. So don’t try to be like them. Don’t try to beat them at their game. Instead be that lonely solder that infiltrates through the lines and sneaks unnoticed right to the source.