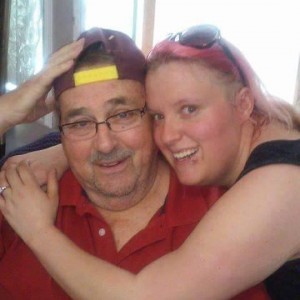 Today’s song is another quite special one for me. I was asked to write a song for a father of a friend of mine, who is suffering from ALS. Writing a song about people can be hard, and the best way I like to do this is by hearing their story, so I asked for it. And boy did I get a story…

Ever heard of the expression that truth is stranger than the story? This definitely was one of those stories. But as in so many stories, I felt great strength in Ken’s story. Having been brought up in a destructive environment, it is really hard not to fall in to the same learned habits, we pick up from our parents as a child. But Ken used his hardship to become a better person. He learned from his parents mistakes, and tried to do the very best with his own children.

The song itself tells the story, so there is not much I need to add to it here. But I would like to thank Tiffany, Ken and their family for letting me share this story. It truly is an honour for me. We are all thinking of you Ken.

So let me know what you think of the song and please share it with the world. I believe Ken’s story needs to be heard.

On a small technical note, I decided to test out band camp for change in these blog posts. I thought it would be nice to make the songs available to download straight away as well 🙂 As before some of the songs will be recorded with a different version for the album, but the acoustic version will be available straight away. Also I let you set your own price and it has no minimum, so if you cannot afford to pay, that is absolutely fine. I rather you enjoy the music than not 🙂 But if you do decide to pay for the track, all the money will be spent responsibly towards my next song, album, blog post, concert, tour… Basically you keep this thing rolling and I appreciate it more than you can ever imagine 🙂