How would Johnny Cash do it? 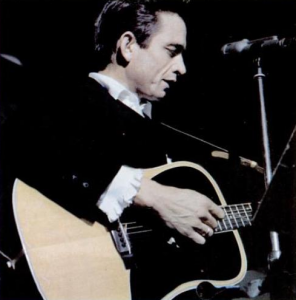 By now it is no secret that I am a quite big Johnny Cash fan. If you grew up in the western world, Johnny Cash is pretty much as well recognised name in music as Elvis or the Beatles. So obviously I would have been aware of him at a very young age. There were always two things about him. There was this coolness to him that no one else could quite beat. But also he was a real person with real struggles in his life, he was somehow more of “one of us” than just some big hero up in the clouds. But as I grew older, I learned more and more about him, started to collect his albums, I think I have most of his big hits on several albums as I still cannot walk past the three CD box collection sets, when I walk into a record store. Not only has he written some killer songs, but he also had a way of making other people’s songs his own. Johnny’s music was never about trying to impress with fancy musical ability, it was always about the songs.

I have been a full-time musician for nearly two decades now. In that time I have been through the youthful eagerness trying to impress with my fancy guitar work, trying to play faster and faster high on adrenaline from a frantic crowd living in the moment. I stood on pretty much any kind of stage and watched the audience on thousands of shows by now. I tried to learn what works and what does not. I tried to understand what is the difference between the one’s who make it and the one’s who don’t.

Ralph Murphy (Author of “Murphy’s Laws of Songwriting“) pointed it out, that in clubs and pubs people like you because of your personality, how well you performed, how much they like the venue, beer, wine, food, and after all that comes your songs… Sad but true… People buy your music at gigs because of the experience they had, not because of your songs were great… But what makes you a great artist, is still your songs. It’s the songs that will get you out of the pubs and into the listening venues and selling your music outside your live shows. And Johnny Cash always spotted a good song.

So still today when I work on my music and might hit a “wall” I ask myself: How would Johnny Cash do it? And this does not mean I’d copy his music, not at all. It means that professional mentality he had throughout his career. How to write a good story, how to tell it, or make a song your own. How to connect with your audience, how to make them relate to your music. These are the skills that have been the building blocks of great artists in the past. And I know we all are tired of hearing people complain about the state of the music these days, but sometimes those skills get lost in the music designed in a boardroom of a big record label. The other side of the coin is the buzzing underground scene this new music business has created, where there are so many real musicians making real music. And I am proud to be part of that and I’m pretty sure if Johnny Cash was still alive, he would associate himself much more with this underground.