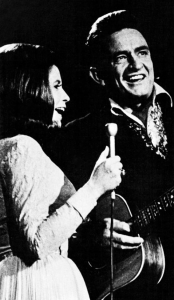 To me the measure of a true love is not the romantic beginnings, the first kiss or the first time we set our eyes on each other. That is mainly just chemistry. To me the true measure of true love is in the later parts and the end of  relationship. That is where you see couple still in love after all those years, supporting and holding on to each other. In my opinion one of the most ultimate love stories would be the one of also one of my musical heroes of all time, the country music legend Johnny Cash. He was married in the early part of his life to Vivian Liberto for 12 years, but the marriage ended up in divorce, due to Johnny’s quite wild life style and Vivian being the “touring musicians widow”. The thing was though, that Vivian and Johnny had met while still quite young, and most of their dating happened over a mail as Johnny was deployed in to Germany with the Army and they married not too soon after his return. So in my eyes they didn’t have really much time to get to know each other in real life before getting married and jumping in to the family life. And I can sympathize how hard Johnny’s touring must have been for both of them.

But soon after their divorce Johnny married to June Carter, who in my eyes was without any doubt Johnny’s true love. They had known each other for thirteen years, toured together and knew each others inside out. I mean not to take anything away from the breakup of Johnny and Vivian as I am sure she must have gone through hell, but Vivian mentioned the drugs being one reason for the divorce, where as June Carter actually helped Johnny to get off from them. That can not be easy thing to do, to watch some one you love go through the withdrawals in agony, but through it all June stayed by his side. They continued their career together, and when June passed away in 2003, her orders was for Johnny to continue making music. And so he did. Amazing 60 songs, until the loss of the love of his life (and the complications from diabetes) finally took him four months after Junes passing.

During Johnny Cash’s last live performance he read a statement:
“The spirit of June Carter overshadows me tonight with the love she had for me and the love I have for her. We connect somewhere between here and heaven. She came down for a short visit, I guess, from heaven to visit with me tonight to give me courage and inspiration like she always has.” (Wikipedia)

To me this one of the most romantic stories and a proof of the existence of True Love.