John Moreland, In The Throes 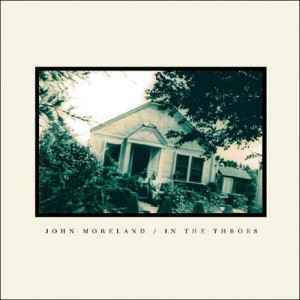 Once again I got some music recommended to me through Twitter, keep ’em coming 😉 I was completely new to John Moreland’s music few weeks ago, so after checking out few tracks online, decided to purchase his latest album “In The Throes”. In my research for new music (and for the reviews) I usually listen to tracks online, check out few videos, visit the artist’s website and if they have Wikipedia page, I’ll read that through as well. This time I wanted to get in to the music before I learned about the artist. So I have had this album on my iPhone pretty much on full-time rotation for the past two weeks and only looked in to John and his career just before writing this review.

John’s ability as a songwriter is evident in every ounce of this album. The lyrics dig deep in to self discovery, lost love and even questioning the value we place in songs these days in “Nobody Gives a Damn About Songs Anymore”. The wordsmith in John Moreland comes out in full show in songs like “Blacklist” where he sing about the relationship between the man and his faith as the years in his life starts to question things. In fact this subject keeps creeping up in the album, and how John approaches it just grows my respect for him more. The way it comes across to me is a man not trying to dismiss others faith, but questioning his own. “Break My Heart Sweetly” is a beautiful love song, and again the imagery John use in this songs is nothing short of amazing. Also the gentle acoustic guitar and vocal approach almost transports you with the song. On my “research” in to John Moreland I learned that he is a bit of a jack of all trades. He plays most of the instruments on the album, apart from few quests. He’s had several releases in a year in the past, which is something I can relate to quite well 😉 Five albums and three E.P.s in the past six years, it seems like I have few more albums to purchase from him. Also his work method comes very much from the DIY punk world, where he puts out his own albums and deals with small independent labels. The album as a whole has very organic sound to it. You hear real instruments, not restricted by layers of compression and digital processing. I am a big fan of full acoustic guitar sound, and you will have plenty of it here. Also the drum sound really intrigued me, it has a great acoustic feel to it. Johns voice is somewhere between Bruce Springsteen and Tom Waits, but still definitely has his own tone, one of those you will recognise in an instant. When the last notes of the albums final track “Blues & Kudzu” die down, somehow the rooms sounds more quiet than before… This album is a must.