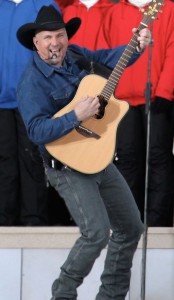 Now the whole “Garth fest” is up in the air. The Promoter went ahead and sold out the five shows, but with a small note “Subject to license”. Obviously any event of this size requires planning permission and licence. The estimated 80000 people per night need to get in and out of the venue safely and through the North inner city. There is very little dedicated parking, as old city like Dublin was never built for traffic. Sure the normal rush hour traffic in this city is crazy.

The residents in the area would be subject to five days of madness, without a doubt. Obviously this is a big issue. When the Stadium was built, there was a promise made to the residents of no more than three concerts a year, and already this year the oh so famous One Direction did three nights. Now even though I understand where the residents are coming from, I think these three shows a year was ridiculous decision to start off with. Again, my sympathies are with the residence, but surely there could have been some sort of compromise done here, don’t you think?

The income and work this spectacle would bring to Dublin city and its surroundings is estimated to be around 50 million Euro! This cannot just be ignored, it is a lot of income to a city which still is recovering from some tough times.

Garth was offered two options, just do three of the five shows, or do two matinee shows during the three days as well as the evening shows. Mr. Brooks refused both options. First of all he said it would be unfair to choose 160000 people who would not see him. Also performing more than one show a day would compromise one, if not both shows and would again not be fair to the fans.

I can fully understand the fans’ frustration, but I think as an artist I can also understand Garth’s points. He just wants to do the best show possible to everyone who bought the tickets, and two shows of this scale in one day… would be plain crazy. Personally I think the government need to step in here, and if they don’t, they just prove they are putting “a matter of principle” on the way of what’s good for the city. But hey, it’s easy to brush this under the carpet with a government reshuffle…

As I write this, the ticket master has delayed the ticket refunds until the 17th of July as according to them negotiations to try and find a resolution “are still ongoing”. So time will tell whether these probably by now Garth Brooks best known shows will go ahead at all.

But here is another thing. I am NOT accusing anyone for this, it just seems funny that at the height of this fiasco, Garth had a press conference in Nashville. This press conference not only did talk about the Dublin show situation, but also announced Garth’s sign up with Sony Nashville and his first new material in 14 years, that is going to be released later this year. I wonder if Mr. Brooks would have got the same press coverage without the Dublin show fiasco?