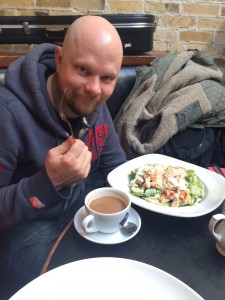 I have no problem saying I have gone on bit of a promotional over drive in certain aspects of my career. It is hard work to get your head above to noise and make your voice heard in the music business. But I have been very conscious of the route I have taken and how I approach it.

Just to give you few examples, I decided to use the blog as a massive building block in my promotion. The reason I decided to do this comes down to two things. First of all, it gives me a voice outside the music. When you read these blog posts, you get inside in to my thoughts and views. I personally believe this is a way for your followers to relate to you. Second, it is a way to be active, and seen by many regularly while offering valuable content. If I spent the same amount of time shouting about my music, I probably would have alienated most of you…

But it does come with a price. First I started blogging once a week, then slowly moved to six blogs a week. Since the beginning of 2015 I have been posting 12 blog posts a week. I enjoy this very much, but I would not recommend it to most people. You see, unless you absolutely love it, you will not be able to sustain it. But what I would recommend you to do is blog once a week. This is a great sustainable schedule, that still can become a routine that won’t take too much of your time.

I also release a new song every week, which I have done now for year and three months as I write this. In the beginning the schedule forced me not to over think, and just get the material written, and recorded in time. Again, now I love it. I have process in place where I can churn out high quality recordings in a minimum amount of time. Writing a 52 songs in a year is a great thing to do. It will massively improve your songwriting. Still it is not for everyone. And I probably would not recommend it to most of you. But what I would recommend is any musician or a band to commit releasing one song once a month. This is a great way to build up momentum and keep it going.

The last thing I want to add is the balance. Why do I blog 12 times a week? Out of love. How often do I blog about my own music? No more than twice a week, most weeks just once. You see, I am offering advice, opinions about random things, share things I like and try to build up a conversation. So when it comes to that one post about my music, it does not feel as much as promotion, but just me sharing something with you 🙂 So think about that one in twelve, one in six at the most balance. This is what you should implement on your social media as well.