I got asked to do a tutorial on the strumming hand for a great Robert Earl Keen song Corpus Christi Bay. But as so often is the case with a good song, I got into it a bit more and decided to do a quick video of me playing the song. So thank you Andrew 🙂 (And sorry if the pronunciation of your name is not the best on the video, English is not my first language. That’s my excuse and I am sticking to it) 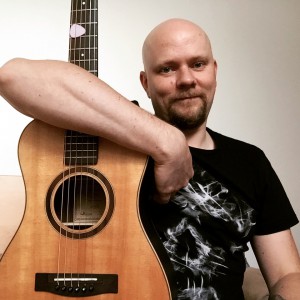 As I mentioned on the video my guitar is tuned to DADGAD, which is the tuning I use all the time. The song on the album is in the key of B flat, just stick a capo on the third fret, that’s what it sounds like they did on the album. It’s straightforward enough, but what gets most learning guitarists is the two down strokes on the fourth beat of the first bar in the verses. Just keep an eye on how I do it on the video and you will get it 🙂

On another quick technical note. I was a good boy this last year and the Santa brought me the new iPhone 6, which I used to film this video with. Also the sound is from the iPhone microphone. I must say I was impressed with the quality. One of my plans was to make more videos in 2015. Some of them will be bigger productions, but also I want to be able to post quick, one shot videos like this with very minimal editing. I still think I might need to look into some kind of portable external microphone for the job, but we are half way there 😉

And of course the guitar on the video is my Journey Instruments OF420, which by the way is sounding better by the day. I heard they have all mahogany model coming out as well. Hmm… Might try to be a good boy this year again and maybe the Santa will be good to me again next Christmas 😉

Let me know what you think of the video 🙂

The author J.P. Kallio is a singer songwriter
To get EIGHT of his free songs go HERE