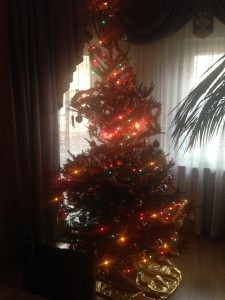 Christmas Eve was probably my biggest culture shock for when I moved to Ireland. At Finland Christmas Eve is when we sit down to our Christmas dinner (after the Christmas sauna of course) and after the dinner is when the Santa clause comes knocking. In the Finnish Christmas table you will find a ham, the turkey was traditionally not such a big thing. And as a kid I was always allowed to stay up as long as I wanted in Christmas Eve. Christmas Day we all slept as long as we wanted and later on the day we’d go to visit grandparents, or they’d come to visit us. In Ireland my jaw dropped when someone asked me if I’d go for a pint on Christmas Eve…

But In general In Ireland the tradition is very similar to most of the English speaking world, where you have your Christmas dinner on Christmas Day, and the Santa comes during the night and leaves the presents under the tree. You have a turkey, you have Christmas crackers and Brussels sprouts.

This year I am in Poland, and here the tradition is similar to the finish one, but with some changes again 🙂 Poland, as Ireland is Catholic country and you do not eat meat on Christmas Eve, but you still sit down to a very impressive feast with your loved ones on the night and the Santa clause arrives after the dinner. (Apparently he is a bit over worked this year and has asked me to fill in for the job here 😉 ) Then on Christmas day you have a big feast again, but this time you have the meat as well and it is not unusual to have a few shots of vodka as well, after all it is Poland 😉

And let’s not forget that not everyone is as lucky as to celebrate Christmas with their loved ones. So spare a moment of thought for them. And on another note, It is only 31.5% of the world’s population who are Christians and celebrate the birth of the Christ. But I firmly believe the numbers celebrating the arrival of Santa clause are bit bigger 😉