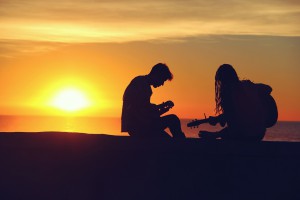 Sometimes it seems like the competition in the music market is so fierce, that most of us feel like we are on a battle field. It might feel tempting to hold on to your secrets to success with your dear life, so that you can have a competitive edge. Surely for us to climb to the top, we need to leave everyone else behind? Actually, no!  This is a mistake I see so many young bands make, and I must admit there was a time in my early days as a musician I was guilty of this as well. But I was lucky  to stay a float long enough to learn that there is more than enough of room for the most of us.

The whole idea of competition in the field of art of any kind, I believe is flawed. Sure you can set some artistic parameters to measure certain aspects of a performance, or an artistic creation. But I bet some of the biggest artists of our times might fail on these parameters. So you see, the thing that makes art so intriguing, and a source for many heated discussion, is the fact that ultimately it comes down to individuals taste. Some of the greatest and most critically claimed artists in the history had more haters than fans in their time. The next American Idol winner will definitely have some success, but will they go down in history as the next Bob Dylan, or Johnny Cash? No! And why? Because the parameters in those competitions are set to please as many people as possible, to remove the controversial artistic elements that might not please the masses right now, but just might stand the test of time.

It is the artists that go out there, help others, collaborate and share selflessly that other artists want to help. You see, music industry is massive. Even our local scenes are large enough for pretty much any band that comes along. And it is not the other artists who have been around long time, who weeds out the week ones. It is the general public who goes to live shows regularly, who will determine the faith of any new act. If the new act is good enough, they will come back to see them (provided the artist does the leg work to promote the show), if they are not, people will forget about them fast.

And you never know who will make it in the end. When U2 first started to play shows around Dublin, everyone thought they were useless. In fact their skills as musicians were “not the greatest” to say the least. But they were persistent and kept gigging until they got better. The rest is history. So you never know when that new band you have never heard off before, might just become the next hot thing. And as you were nice to them and helped them at the early stages of their career, they might just return the favour.

Besides, I said this before, and I will repeat it again, it pays to be nice! Be nice to people, in work and out of work, you never know who that stranger next to you in the queue in a coffee shop might be. And at the end of the day if I am lucky enough to succeed in my career, I’d like to be able to look in the mirror and be proud of my success and how I got this far.