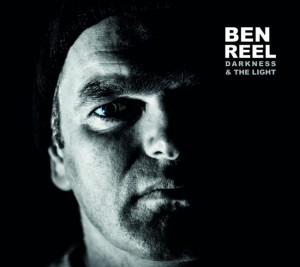 I met Ben Reel few years back at a festival in Germany. We ended up sitting up all night singing songs in a local bar, as you do from time to time 🙂 But what hit me during his show that night and while listening his latest album “Darkness & The Light” was the maturity of songwriting and the experience that shines through his music. Ben is one of those road warriors, who in the middle of all the turmoil of what’s been happening in the music business in the past decade and a half he just keeps churning out albums and touring.
Ben has very distinctive voice, but I love that you can still hear snippets of influences here and there. In “Watershed” you could for a second think it was Bruce Springsteen singing, but when Ben hits the chorus you can also hear the Neil Young influence. There is also great honesty in Ben’s approach to the Alt Country, Americana and country rock. Let’s face it, the origins of this type of music are in the States, but Ben keeps his music strongly rooted in Ireland. This album filled with songs from an experienced storyteller, a hidden voice of a nation that was hit hard by the economic downturn. And only from someone who has spent weeks if not even months at a time on the road and away from loved ones would you expect to hear such a heartfelt song as “Counting Down The Days”. Songs like these don’t just happen, you live through them. You’re Not Alone reminds me something Roy Orbison could have written, but even when the influences and names drop, Ben still does it his own way. Rather showing respect to his influences than trying to sound like them, a sign of a great artist. In “What Is Done” You can hear the amazing dynamic range in Ben’s voice, where he goes from a fragile gentle voice to almost an angry roar.
I don’t know if it is the result of the economic downturn, state of the music business or just simply people getting tired of the overproduced pop music, but I have noticed a lot more interest in Folk and Alt Country music and real singer-songwriters in the past few years. “Darkness & The Light” show’s that Ben Reel is ready for the times to come.