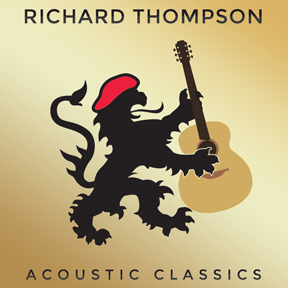 Richard Thompson is one of those road warriors you can’t help but to admire. From his early work with Fairport Convention to his expansive solo career, it seems like he is showing no signs of slowing. He traveled a road that never hit “the big time” even with some big record label backing. In 2001 Richard finally parted ways with the labels and decided to head the independent rout releasing his albums himself. Ironically the move resulted in a bigger promotional push and healthier album sales, proving once again you are better off fighting your own fight than being just a number in some big labels boardroom.

Richards Latest album “Acoustic Classics” was a collection of his earlier songs rercorded with just acoustic guitar and his voice. To me personally even thought Richard Thompson is a fantastic electric guitarist, his acoustic work is some of the finest around. This album is stripping the songs down to their basics, which I believe is the best way to hear the true talent of Richard Thompson. The Album was originally meant for his live acoustic shows, as Richard there was nothing there that represented the solo shows. Debuting no. 16 on UK album charts obviously the album has become more than that.

This is how I like my “best of” albums. I was never a big fan of collections of songs from artists previous albums released as a way to sell the tracks that true fans would already have. But if the artist is willing to do something else with the songs, then I am interested. There are many great songs on “Acoustic Classics”, like “Galway to Graceland”, “Beeswing”, “Valerie” and 1952 Vincent Black Lightning”. The songs spanning a career over 45 years, there is bound to be lot’s of treats, especially from an artist the caliber of Richard Thompson.

And just because the album was meant to be mainly sold as a merchandise at the live shows, don’t be in any doubt about the quality or the performance of this album. This is a must have album for any Acoustic guitarist and a songwriter. Richards acoustic guitar work on “Acoustic Classics” is a fantastic display of skill combined with dynamic play and emotion. He comfortably jumps from skilful finger picking to strumming his guitar to almost a roar. There are also few tasty guitar solos on tracks like “Wall off death” and “When the spell is broken” among others. Also Richards singing voice is in as good shape as ever. He has one of those voices you recognise in an instant.

“Acoustic Classics” is an album you should check out straight away. If you like good songs with stories and tasty acoustic guitar, you will not be disappointed.