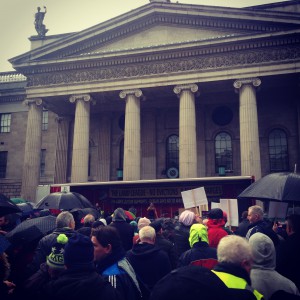 It has been a busy week to say the least, even though I took a few days off to shake off my winter cold. My fourth album “The Call” is finished and sent to distribution and it will be released on the 2nd of December 🙂 Meanwhile in Ireland we had another round of protest against the Water charges and the privatisation of Irish water, more on the subject on one of this week’s posts below. And we survived the Halloween, which I spent playing a show in the Porterhouse with Sliotar. But let’s get into this weeks posts.

This weeks song “Drowning Man” was another deep one and few of you messaged me telling how you can relate to the song and the blog post. I always love hearing your thoughts. Check out this weeks song here:

On Tuesday I wrote about how be the business side of the music has changed, the process of songwriting is still the same. Read all about it here:

The songwriter within us

The unbelievable feedback I have got from you guys for my songs and blog posts since the beginning of the year, made me rethink my Mission statement. Check it out here:

I was doing some research during the week, which had me check out loads of new bands’ websites and social media sites. There are some common mistakes I see over and over again, so it was time to write a post on the subject:

On Saturday I was on O’Connell street with tens of thousands of frustrated Irish people showing the Irish government that enough is enough. It got me thinking of the long term international effects it could have if Ireland would just sit still and let the government have their way on the Irish Water privatisation. It might sound like a futuristic sci-fi movie script, but when you really think of it, it is scary how it all could happen:

The air that we breathe

Wow… Another week of quite serious stuff. Hope you found some of it useful, some of it informative and some of it even entertaining 🙂 And stay tuned, more on the way next week 😉